The Law Office of Deputy & Mizell have some of the best Attorneys in the Lake of the Ozarks area. We pride ourselves on our experience and desire to help you with any legal issue you are dealing with.

Dan is a lifelong resident of Missouri. Dan was born in St. Louis, Missouri on February 19, 1971. Dan attended Vianney High School in Kirkwood, Missouri. Vianney is a private parochial high school with an emphasis in preparing its students for college. Dan graduated from Vianney High School in 1989 and received a scholarship to the University of Missouri in Columbia, Missouri. While at Mizzou, Dan was a member of Sigma Tau Gamma fraternity. Dan served as vice president of his fraternity at Mizzou.
After graduating from Mizzou in 1994, Dan was accepted to the University of Missouri School of Law in Columbia, Missouri. During law school, Dan worked as a law clerk at the firm of Oliver, Walker and Wilson in Columbia, Missouri. During this time Dan began learning the fundamental elements of insurance litigation, workers’ compensation and family law. Dan assisted Art Oliver, Roland Walker and Betty Wilson with various projects. Dan even assisted Art Oliver with an automobile accident trial. Dan regards his law clerk experience at Oliver, Walker and Wilson as absolutely invaluable. 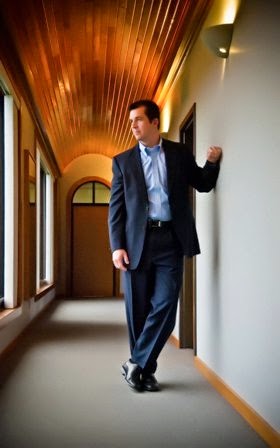 Dan earned several awards during law school. No other award is more cherished by Dan that the Order of Barristers. The Order of Barristers is given to only ten students in each graduating class. It is for excellence in moot court. During law school Dan showed his proficiency in the courtroom by winning the regional moot court competition. While in law school Dan also received the R. David Ray Award for Trial Advocacy and the Roscoe Anderson award for Excellence in Moot Court.
Dan graduated from law school in 1997 and later joined Oliver, Walker, Wilson as an associate attorney. In August of 1998 Dan accepted a new position as an attorney with the law firm of Inglish and Monaco, P.C. in Lake Ozark, Missouri. After working for three years with Lewis Bridges and Tim Cisar in the Lake Ozark office of Inglish and Monaco, Dan, Lew and Tim decided to form their own practice.
In November of 2001 Bridges, Cisar and Mizell, LLC opened for business. Dan was extremely proud to be a named partner in his own law firm. Bridges, Cisar and Mizell, LLC initially practiced out of the Cliffside Center in Lake Ozark. However, the success of the firm allowed Bridges, Cisar and Mizell, LLC to build its own law office building in 2004. Bridges, Cisar and Mizell, LLC moved into the new space at 750 Bagnell Dam Boulevard in Lake Ozark in October of 2004.
Dan’s practice continued to grow throughout the first decade of the new millennium. Dan has always accepted automobile accident cases, workers’ compensation cases, boat accident cases, slip and fall claims, wrongful death claims and other tort claims.
Dan and his family decided to relocate to Lebanon, Missouri in May of 2007. Dan purchased Darrell Deputy’s law office at 120 East Second Street in Lebanon, Missouri in June, 2007. After careful deliberation, Darrell and Dan entered into an agreement whereby Dan would purchase Darrell’s law practice. While Darrell continues to actively practice law in Lebanon, it is Darrell’s intention to slowly and gracefully transition to a more limited role in Deputy and Mizell.

Under Dan’s management of Deputy and Mizell, LLC the firm has grown exponentially. 2008 saw the opening of a new location at 16 Camden County Northeast in Camdenton, Missouri. In 2011 the firm purchased Kerry Rowden’s law practice in Tuscumbia, Missouri. Kerry Rowden became the Associate Circuit Judge in Maries County, Missouri.
If you have been involved in any type of incident where you suffered bodily injury due to the negligence of another, you should contact Dan Mizell for a free consultation.
Dan is a member of the Missouri Bar, the Laclede County Bar Association and is a fellow of the Missouri Bar Foundation.
Dan has been married to his wife Jenny since 1993. They have two young children, Katie and Missy. Dan and Jenny reside in Lebanon, Missouri.
Areas of Practice
Litigation Percentage
Bar Admissions
Education
Published Works
Honors and Awards
Professional Associations and Memberships
Past Employment Positions
Fraternities/Sororities

Let our 70+ years of combined legal experience help protect your rights!  Contact us for a FREE consultation.

We are the best Lake of the Ozarks Lawyers!
We are the Attorneys at the Lake of the Ozarks to call if you need help
Contact our office today to learn more about our legal services and what we can do to help you. We are available during regular business hours and by appointment on evenings and weekends. You can reach us by phone at 417-532-2191, toll free at 1-877-532-2191 or via e-mail to schedule your free initial consultation with a lawyer.
www.DeputyandMizell.com
Follow us on all of our social media channels:
Facebook – https://www.facebook.com/pages/Deputy-Mizell-LLC/214034448613028
Twitter: https://twitter.com/DeputyMizellLaw
Google+:  https://plus.google.com/u/1/b/109889149770554174356/109889149770554174356/posts
LinkedIn: https://www.linkedin.com/company/deputy-&-mizell-llc